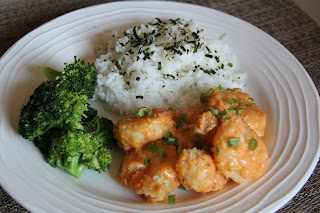 It takes a while because you have to dip the shrimp, then fry, then coat with the sauce.. But it's well worth it! The best part is you can add more Siracha to make it more spicy!!  I took the advice of some others who suggested dipping the shrimp in corn starch before the egg/flour mixture and added 1/4 cup of sweet chili sauce to the mixture. 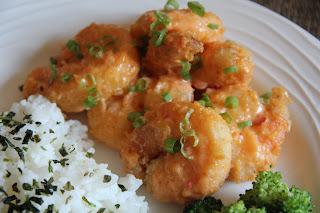 I also made the entire 2 LB bag of frozen shrimp and had more than enough sauce for all of it. 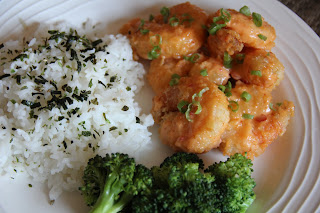 SOoOooooo  Good!!!   Get the recipe here!

Popular posts from this blog

November 24, 2013
Who would have knew how many uses there were for GLAD Press'n Seal??  I've never actually purchased or used this before, but decided to copy a neighbor and use it as a temporary privacy window covering.  We ordered shutters and lucky for us, our order lands over two major holidays (Thanksgiving and Christmas) which gets our installation date in early January.  We've got windows EVERYWHERE in our new house and our next door neighbor can see into our living room window, as can the neighbors from the street...

Our shutter company, unfortunately, didn't give us those temporary accordion shades, but some plastic that purely acts as a privacy covering- it prevents people from seeing through however doesn't do much with regards to blocking the sun from shining in.  They only provided them for the bathrooms and master bedrooms [boo].  So much for the other 16 windows in the house...

In comes Press'n Seal!  It's sticky on one side and it easily sticks to the window…
Post a Comment
Read more

our back yard project

September 25, 2012
We've always wanted to have a small house party, but felt overwhelmed with just 5 people in the living room.  In comes MY back yard project because I was tired of dust blowing into the house and staring at that ugly cinder block wall...not to mention that project that the previous owners started and never finished (see lower right hand corner of photo below).  Eric took ownership of wanting to decorate and 'spruce up' our living room, making it feel really homey and welcoming.  So MY project was the yard and my vision to make it less drab.  Our yard is teeny-tiny and fits right in with our 3 bedroom, 1200 sq. ft. house.

Our friend had a landscaper do their back yard and he came highly recommended, so we went with them without question.  I wanted pavers, artificial grass and two trees/plants.  The landscaper recommended plants that crawl on the wall in effort to sooth my Issue with the cinder blocks...  I wasn't satisfied...  So I hunted and surfed the web for a week…
2 comments
Read more

January 09, 2011
It all started when I was surfing through Hero Cake Pop's blog and stumbled upon a post that had to do with a Wilton Cake Pop Contest... *GASP*  Having Wilton judges LOOK at MY blog, would be an honor in itself?!? !!  [deep breaths]  ...then family graced us with their presence for the holidays and I didn't have TIME to think, plan, or prepare for my pops!!  p.s. we had a FAB time with the FAM!!

So I finally sat down and sketched out my thoughts with my inspiration being an ocean theme.

Wondering if my idea and odd shapes would even work, I thought I'd give it my all and see what comes of it!
It all starts with smooshed cake and Philadelphia Cream Cheese.  See the step-by-step instructions here.
Squeeze as hard as you can to make sure the smooshed cake is one whole piece, this way, it won't crack or break.  I've seen various instructions and I insert the stick in the cake ball, then freeze it, and works for me every time!
Prepping takes the longest, so patience is a mu…
18 comments
Read more

cody cakes
Las Vegas, Nevada
I try to craft fun things that don't always turn out the way I envisioned but is just a fun way to express myself! I love my fur babies, my kiddo and my hubby who complete my happy life. Imperfectly perfect, trying to live in each crazy fun moment with a smile on my face!