August 02, 2012
Ahh Risotto... The ever scary, don't think about attempting it, super difficult- RISOTTO...  The only reason as to why the stigma of risotto is so ingrained in my brain is because of Chef Gordon Ramsey's show: Hell's Kitchen.  "You can't make a @#*$% Risotto?? You Donkey!"

I stumbled across a recipe on allrecipes.com  with 1,149 reviews and 5 stars.. WHOA this must be A-mazing! Thank you Myleen for this Gourmet Mushroom Risotto recipe!!  So I scan the ingredients- simple -and I have most of them in my kitchen already... White wine- YUM; that's an added plus because I can drink it!!

...Nervous... Still... I read the reviews of the first 30 people just to see if they have tips or tricks and I pick up a few!  I also saw a video explaining how to make it, which greatly helped me visualize my success (haha). 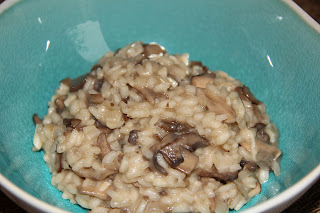 And a success it was!!  Level of difficulty: intermediate in my opinion.  It's just high maintenance during cooking, you honestly can't walk away from the stove for 20 minutes with continuous stirring.  But bakers know that 20 minutes of constant stirring is easy-peasy... it's the cooks that complain about that!!

I followed the ingredients and instructions to the "T" with the addition garlic.  See my helpful tips below as well!

It's a hard dish because you can't taste it in between steps to know you're on the right track... You have to wait until you're DONE before you can actually taste it!  TRUST ME, it is SO worth it!!  It was rich, but not a two-bite and you're done, rich.  It was fulfilling, but not "oh I over-ate and my stomach is going to burst" filling.   To be very honest (and I hate to toot my own horn) but it was seriously restaurant quality good!!

This is definitely a dish I'm making when we have company.  And there are so many variations, asparagus and sun dried tomatoes.. chicken and mushrooms... scallops and truffle oil... NOM NOM!!

The stigma has gone away and trust me when I say, it's risotto night at least every other week!!

Popular posts from this blog

November 24, 2013
Who would have knew how many uses there were for GLAD Press'n Seal??  I've never actually purchased or used this before, but decided to copy a neighbor and use it as a temporary privacy window covering.  We ordered shutters and lucky for us, our order lands over two major holidays (Thanksgiving and Christmas) which gets our installation date in early January.  We've got windows EVERYWHERE in our new house and our next door neighbor can see into our living room window, as can the neighbors from the street... Our shutter company, unfortunately, didn't give us those temporary accordion shades, but some plastic that purely acts as a privacy covering- it prevents people from seeing through however doesn't do much with regards to blocking the sun from shining in.  They only provided them for the bathrooms and master bedrooms [boo].  So much for the other 16 windows in the house... In comes Press'n Seal!  It's sticky on one side and it easily sticks to the w
Post a Comment
Read more

our back yard project

September 25, 2012
We've always wanted to have a small house party, but felt overwhelmed with just 5 people in the living room.  In comes MY back yard project because I was tired of dust blowing into the house and staring at that ugly cinder block wall...not to mention that project that the previous owners started and never finished (see lower right hand corner of photo below).  Eric took ownership of wanting to decorate and 'spruce up' our living room, making it feel really homey and welcoming.  So MY project was the yard and my vision to make it less drab.  Our yard is teeny-tiny and fits right in with our 3 bedroom, 1200 sq. ft. house.   Our friend had a landscaper do their back yard and he came highly recommended, so we went with them without question.  I wanted pavers, artificial grass and two trees/plants.  The landscaper recommended plants that crawl on the wall in effort to sooth my Issue with the cinder blocks...  I wasn't satisfied...  So I hunted and surfed the web for
2 comments
Read more

January 06, 2018
Happy New Year!! My Instant Pot doodle pages are a work in progress.  I'm working on a few more and trying to get all the handy tips and tricks and what the @#$% is this problems into a doodle format! I'm trying to hurry but we have lots going on with the last of our family visiting from the holidays leaving this week.  I'm trying to take care of our rental unit and find new tenants and of course, keeping the toddler princess occupied and happy.  All the while, trying to have dinner on the table for us after a long day!! I will be selling this on Etsy, however I promise to keep it affordable! So, it's coming, I just don't have a defined timeline.  Thanks for your patience and understanding
Post a Comment
Read more

cody cakes
Las Vegas, Nevada
I try to craft fun things that don't always turn out the way I envisioned but is just a fun way to express myself! I love my fur babies, my kiddo and my hubby who complete my happy life. Imperfectly perfect, trying to live in each crazy fun moment with a smile on my face!